From start to finish, the timeline varies greatly for foreign service applicants.  I lucked out this year, and I think my timeline is something close to a best case scenario.  I took the written test in March, and I will be entering an A-100 class less than a year later.  I guess having a fairly boring life makes the security clearance process go more smoothly.  It also helped that I gathered all of the same background information a few years ago to take the bar exam.  For these reasons, the security clearance only took 10 weeks.  I thank my lucky stars for this because I have read and heard some real horror stories.  A friend of mine said it took 18 months for his security clearance to go through.  Yikes!  I had drinks last night with two of the people that passed the oral with me on Aug 23rd, and neither of them have received their clearance yet.

I guess I should also note that this is my second attempt to get into the Foreign Service.  I took the written test last year, passed, and then just missed (5.2) on the oral.  Had I not come so close, I probably would not have tried again.  But being off by .05 seemed almost to challenge me to try again.  That and the fact that my car had been on the receiving end of a shootout in Petworth the night before while I was attending a community meeting for work.  Instead of going to bed early and getting a good night of sleep, there I was at midnight watching an evidence technician pull panels off my car looking for bullets. 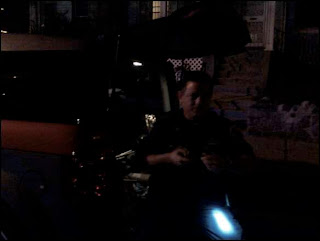 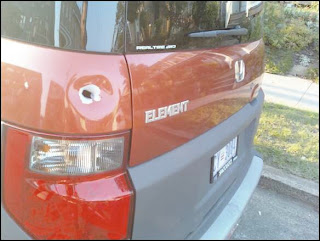 That is a big hole!  The cop told me it was a .45.
So try again I did, and this time the whole process seemed easier and shorter.  I got much higher scores on both the written and the oral, and now I am just waiting for the A-100 to start.  For all of you out there thinking of going through this process, definitely give yourself at least two chances.  I cannot overstate just how much more comfortable I was at the oral this year because of my experience last year. Night and day.