Saying "Goodbye" to the Wilson Building

Spencer has spent a little more than 3 years working at the Wilson Building. The capitol of Washington, DC. For those of you who believe that DC is just a city designed around the Federal government, think again. The budget for the city is greater than many states and so is the population. We didn't think much of DC city government when we first lived here more than 10 years ago, but when Spencer started working for the city council our opinions changed. We have grown to love half of the people who work there and laugh at or with the other half. We even have a picture of Council Member and former Mayor, Marion Barry, holding Teddy just after he was born. Ah, good times.


The District Department of Transportation (DDOT) is now posting old photos of DC on Flickr. They are fantastic. One is appropriate to post here. A view of the Wilson building from 1960, before the Reagan Building and before Metro. 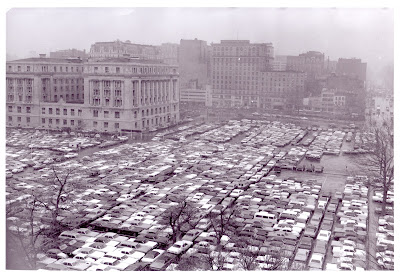 Spencer has many fond and even more not so fond memories of the activities in that building. Some of my favorites are watching Obama's Inaugural Parade from Coucilmember Catania's office. The street running horizontally through the upper third of the picture above is Pennsylvania Ave. The building is between 13th and 14th STs NW. A perfect viewing spot for the parade, warm too. I will also miss bringing the kids into the building to see daddy. There are very few young married folks working in there, so little kids are a rarity. They were always terribly spoiled, even in the back room during Leg meetings.
Saying "goodbye" to one place is hard and always signifies a change. Saying "goodbye" to the city and wow, even the country, is going to be very hard. One tep at a time.