This past weekend we visited the Anji Bamboo Forest, which is a few hours drive away, with the Shanghai Drunken Dragon Hash House Harriers.  We were regular hashers in Lesotho, a place where there wasn't much else to do.  We'd like to be regular hashers again in Shanghai, but many things -- work, the kids' activities, big-city living -- conspire to get in the way.  It was a great trip!  Good people, long hikes in a beautiful forest, and some fresh, clean air all combined to make for a good weekend getaway. 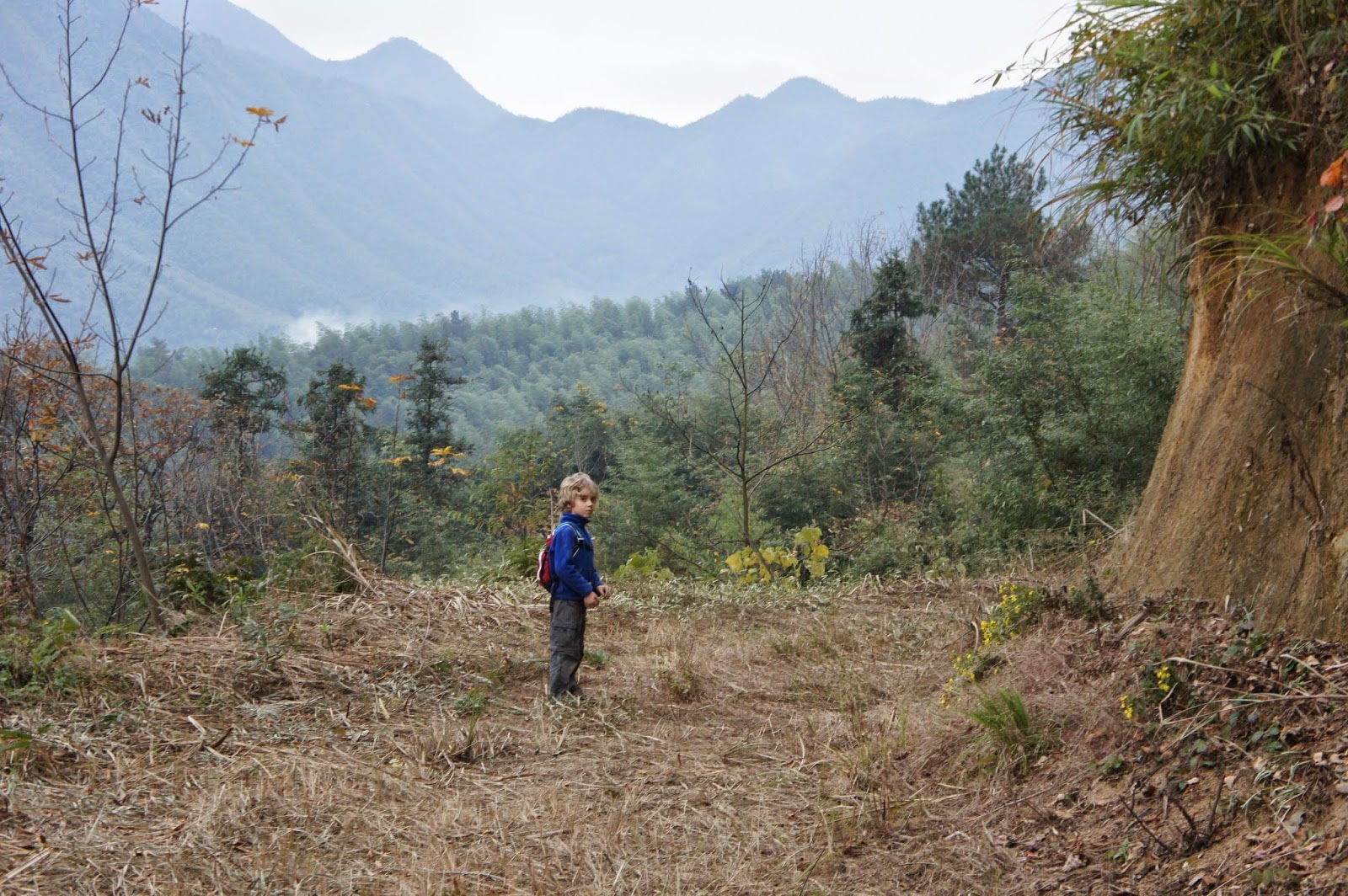 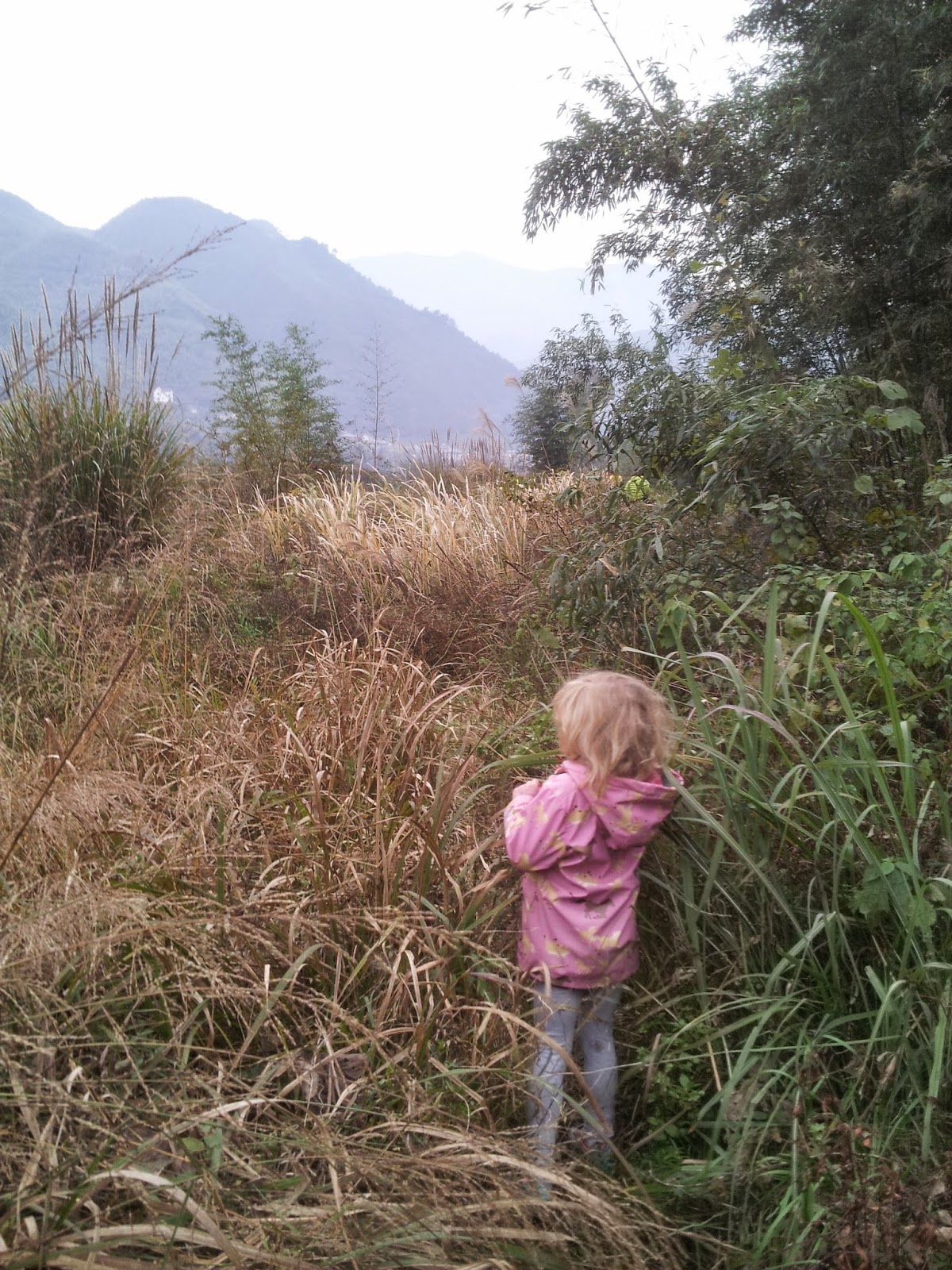 If the forest looks familiar, it is because you may have seen it before.  The Anji Bamboo Forest is one of the sites used to film the movie
Crouching Tiger Hidden Dragon, still one of the only sub-titled movies I have ever willingly sat through and enjoyed. 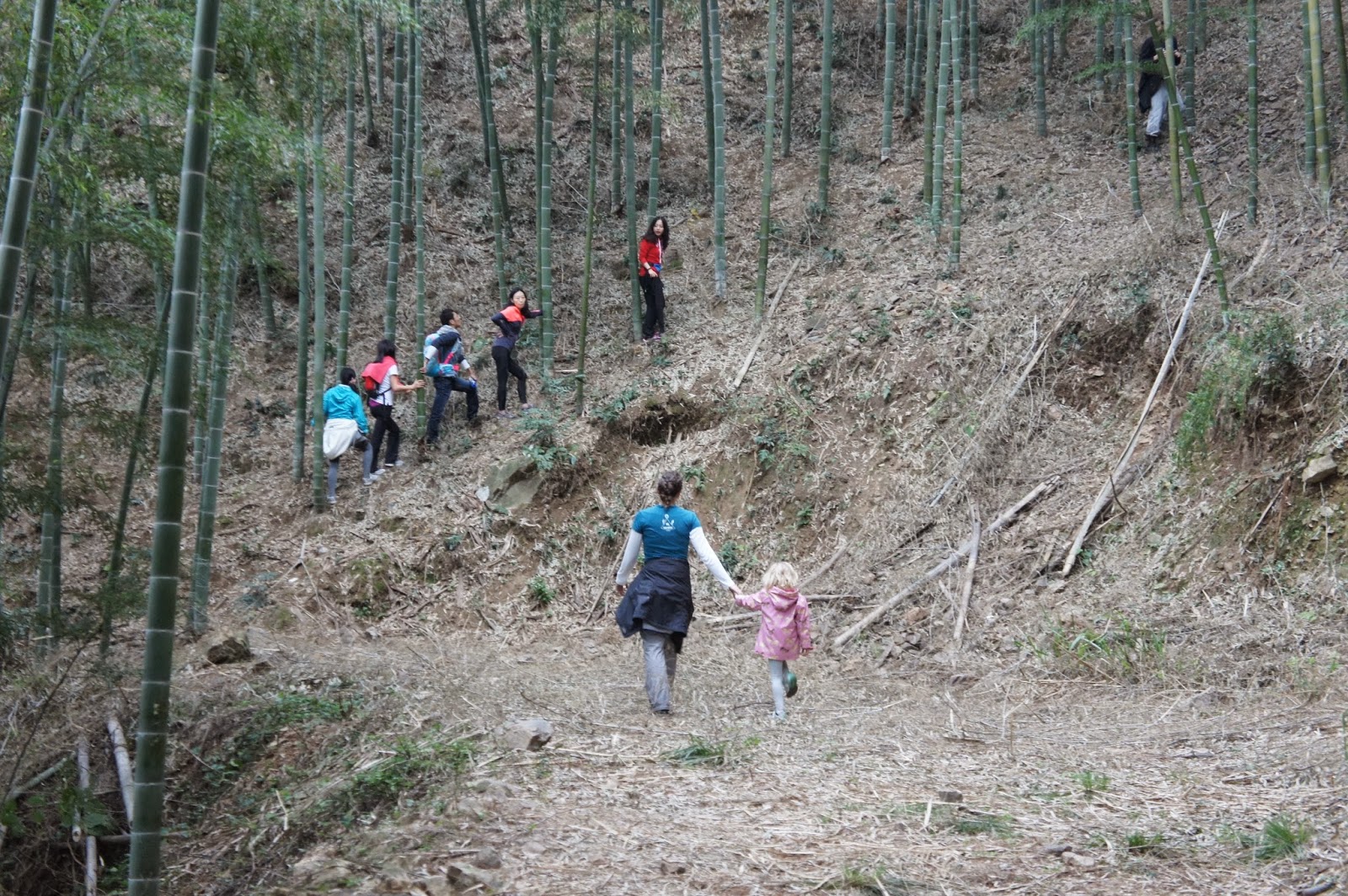 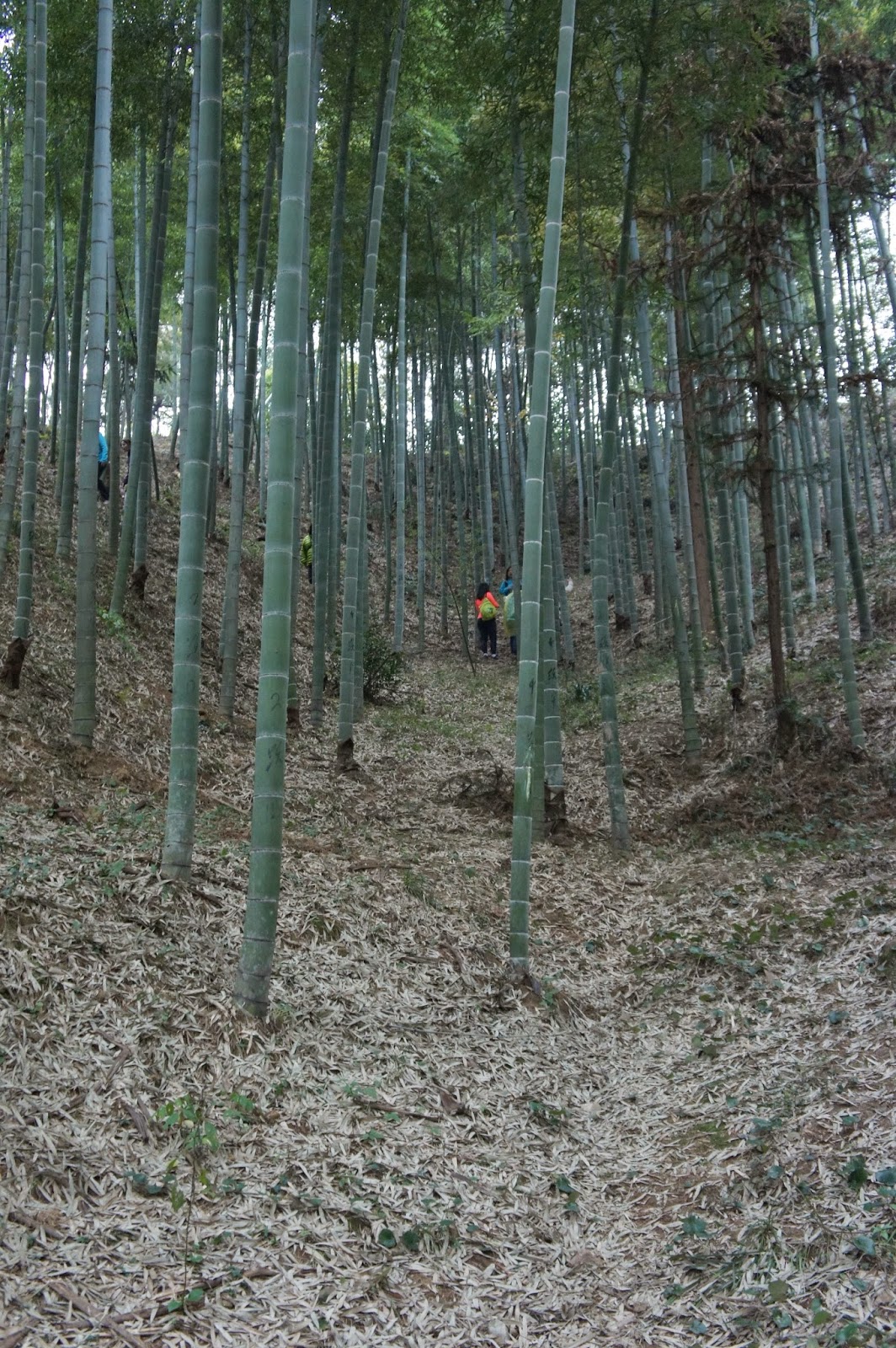 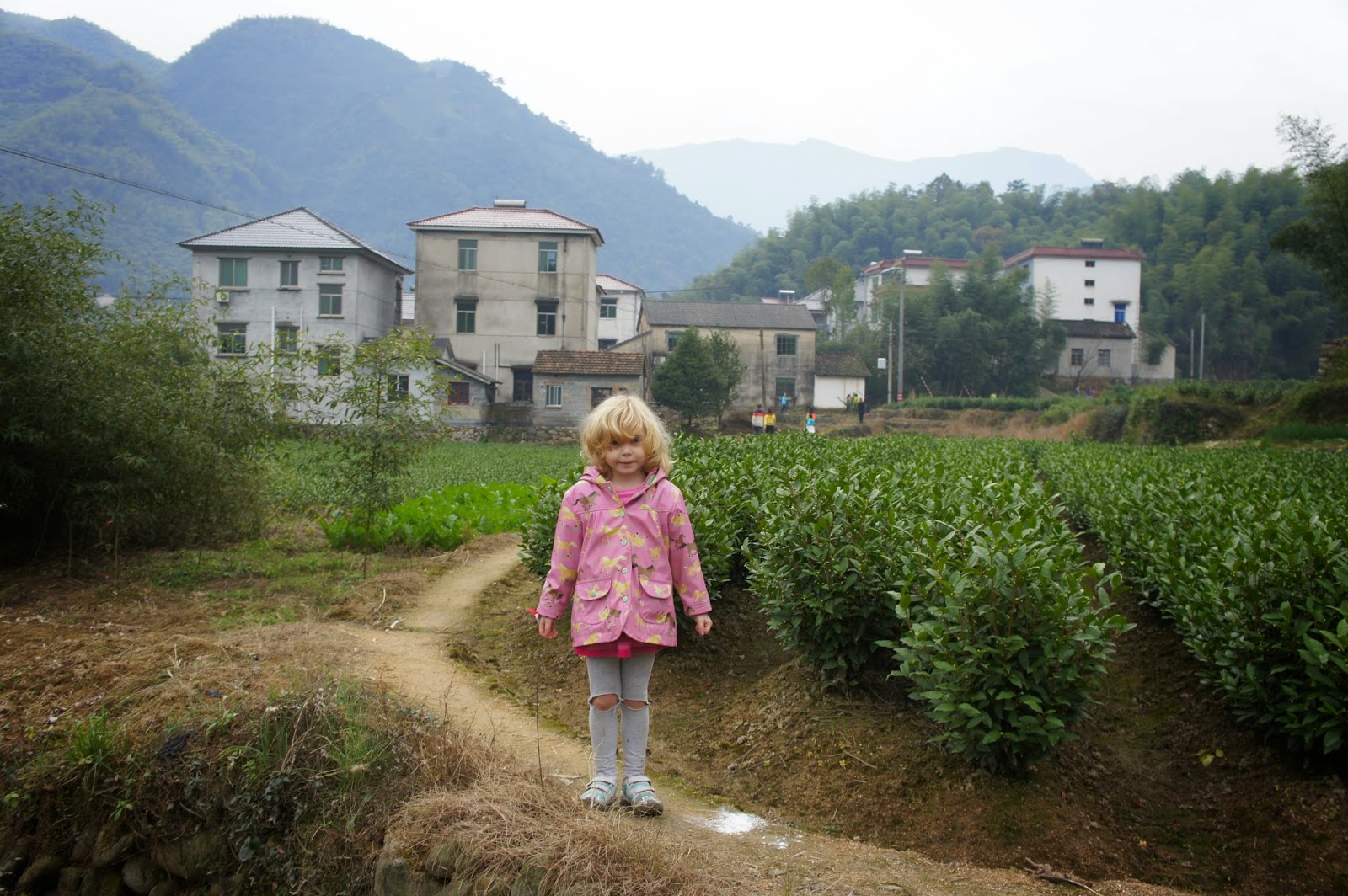 Josephine and her brother are pretty awesome hikers for their ages.  Josephine has been a hasher since she was only a year old, and she made it through most of this hike, up and down these bamboo filled mountains, despite feeling under the weather.

Ted is an old pro at this.  The hike was about 14km (or almost 9 miles for you non-metric system speakers) and he decided to finish off the last 2 km by running it in.

What would an overnight Hash weekend be without a little merriment.  After the hike, everyone had dinner and hung out by a campfire.

There might have been a few drinks involved.
Before we got on the bus back to Shanghai, we had a big meal at the hotel.  One dish looked like the chef had taken a cooked duck and threw it in the blender.  Somehow, the head remained intact, and Bethany (pictured below with Ted) deftly dissected it with chopsticks until she had pulled out the brain and the tongue.  Ted and Josie watched with equal parts horror, disgust, and amazement.  Ted, our brave eater, gave the duck brains a try.  At the time he said it was really gross, but if you ask him now he will tell you it was yummy.

Anji is a place I would highly recommend to Shanghai folks.  We stayed at an ok hotel, but there is apparently a tea plantation there that is a bit nicer.  The scenery is gorgeous, and it is far enough away to make it feel like a big trip, but not so far away that you spend all your time in the car or bus getting there.  It is also just enough off the beaten path that we didn't see any tourists there.