Our first weekend was full of adventure. Saturday we sat inside and played legos all day, but we made up for it Sunday. In the morning we joined the Maseru Hash House Harriers, a hiking group for expats. In the afternoon we went to a local village to watch a soccer match. The kids had a lot of fun and we were all exposed to true Lesotho nature and culture.

Though i had never heard of the Hashers, they claim to have a group in every country. Three members set up a challenging trail the day before and the rest of us try to follow the signs. Every week they go to the new location outside of the city. This gets people out into nature, our of the city, and the best part is that it offers a little social interaction outside of the US Embassy. Sure there were some Embassy folks there, but there were also people from other countries working at their own embassies or NGO's. The hike was quite challenging for us. Spencer and I were not used to the altitude and carrying children on step climbs or narrow, rocky paths. We are going to continue hiking with the group, but will take it slow and avoid the really challenging ones for a while. The end of the hike includes sandwiches and beer, sometimes even a braai (bbq for us Americans). Not a bad way to spend a Sunday morning. 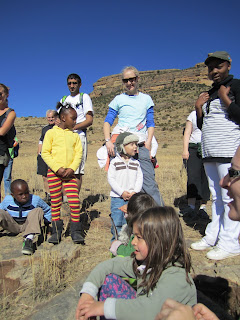 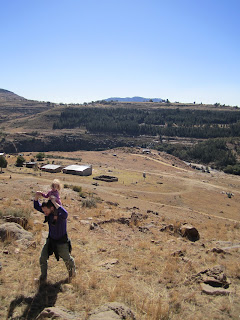 The US Ambassador was heading out to a Peace Corps sponsored soccer match in the afternoon and invited us along. The village was about 40 minutes to an hour out of the city. Spencer, Josie, and the Ambassador watched the game and talked to the locals. Teddy slept in the car for a bit. When he woke up, he and I, along with the Ambassador's driver walked to the match. The driver was so patient with Ted's brand of crazy and also started teaching me Sesotho, the second official language in Lesotho. I don't remember much, but it was a good start. 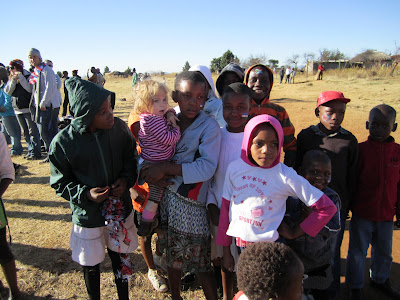 It was a good way to start our time here. We are going to plan some small things each weekend, but like the soccer match, assume that most of the real adventures will be random.