People look at us strangely because we have child seats in the car. I look at them and think they are crazy because they are driving down the street with a two year old hanging out the window. Not local people mind you, but white, Mercedes Benz driving people. Local people cart their kids around on their backs, or one lady had her two year old in wheel barrow along with a propane tank. Her other two kids ran beside the wheel barrow as she dodged cars crossing a two lane highway. As an aside, it should be noted that there are a lot of pedestrian deaths here.
I have noticed that I am usually the only parent hovering over my children. Some parents stand at a distance, most don't even watch. One mother reprimanded me for not letting my son jump off of a platform that was over my head. I have a lot of letting go to do, but I am not sure I will ever be ready for Teddy to jump that far.
There are not that many playgrounds and the ones we have found would never fly in the States. Some have high platforms and no rails, others are broken, and many are old school playgrounds like what we had as kids, like those shown below. Spencer is pretty sure that the one is the same kind of thing his sister broke her leg on when she was little. 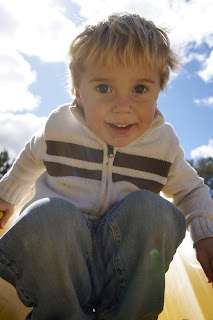 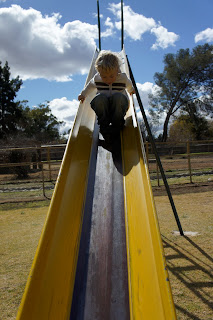 I may have to update this entry periodically. There are so many little things that are different from what we are used to in the States. Some better, some not.

Yes, I did break my leg on one of those merry-go-rounds. There is one in a playground near my house and I cringe every time Ryan goes on it.
I love the metal slides. Those were the best.Not around anymore. You go down so fast on them. and the metal jungle gyms in those pictures are cool, you don't see those around any more either. I used to love climbing and hanging off of them.